FREE SHIPPING ON ORDERS OVER $99! DETAILS 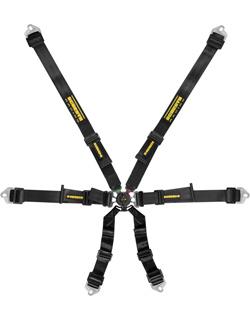 The Schroth Flexi 2x2 FHR race belt, new for 2018, is replacing Schroth's most popular belt, the Profi II 6-H. Like its predecessor, the 6-point Flexi 2x2 features the lightest and strongest Cam Lock system available today, 2" polyester webbing at the shoulders and 2" polyester webbing 'Flexi Design' at the lap belts, lightweight adjusters, and RFR rotary buckle. The Schroth Flexi 2x2 features Frontal Head Restraint (FHR) specific 2 shoulder belts, 2" Flexi Lap Belts, and a T-bar sub strap. All points are wrapped in, so you can use either snap or bolt in end fittings. The Schroth Flexi 2x2's 2" (50mm) specific shoulder belts are designed to make FHR use safer and more comfortable. The full 2" shoulder webbing fits perfectly on a FHR device, creating optimal force distribution on the surface of the device. Usage of a complete 2" belt from attachment point to cam-lock allows the usage of 2" light-weight adjusters reducing mass and drag of a 3" adjuster. One of the main features of the Profi 2X2 & 3X2 belt systems is the 2" (50mm) lap belt for added safety over 3" designs. A 2" belt rides within the crest of the human pelvis where a 3" belt would rest on the edges. This allows you to get the belt up to an inch and a half tighter. That means the lap belt will be working earlier in an accident because it gets loaded faster. It's also more comfortable and easier to adjust because there's less friction through the adjuster. Another feature unique to the Schroth Flexi 2x2 is the "Flexi Lap Belt". The End Fittings and Cam Latches are wrapped into the harness, making it so the lap belt can be changed from a Pull Up configuration to a Pull Down. This allows you to set the belt up just the way you want it for your specific situation. It also allows for Bolt In brackets to be wrapped in for the lap belts if needed. Snap in brackets come standard on the laps. The Schroth Flexi 2X2 comes with Snap-In attachments at Lap and Sub points. The Shoulders come ready to be wrapped around a roll-bar. Bolt in attachments can be purchased separately for shoulders and sub strap. FIA 8853-2016 Approved. Available in black, red, blue, or yellow.